Darren’s all black affair with a dash of white was a sight to behold. 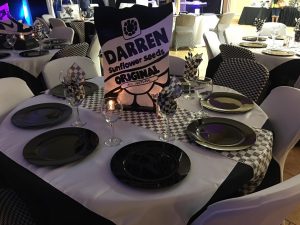 His mom, Kiantha, owner of Iris Event Rentals, out did herself. Amaze Event Hall in New Orleans East, boasted regal black and white decor. Wooden carvings, created by Herman The Wood Geek replicated some of Darren’s favorite things, such as: a Nike high top, a basket ball, and a bag of sunflower seeds acting as centerpieces on a few table tops. Ice sculptures of Darren’s initials and his fraternity’s initials were designed by Chris’ Custom Sculptures. Pretty Girl Parties created an elaborate multi tiered cake topped with Darren’s branded March Madness logo on fondant champagne bottles. 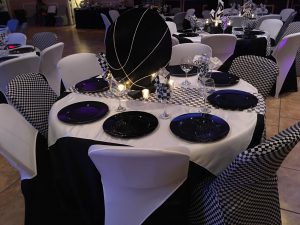 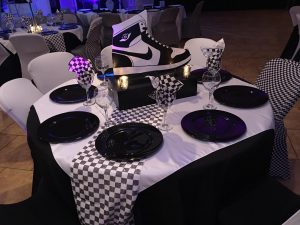 Darren’s pre-party started on Levi’s New Orleans Party Bus. He then made a grand entrance into Amaze Event Hall lead by a Mardi Gras Indian and brass band.

Throughout the night, DJ Ray had Darren’s VIP section and the entire party lit! Midway through the party, a brass band entered the hall playing their rendition of the R&B classic Poison.

Darren made it easy for Shutters and Shoots Photobooth design team. His graphic designer created several logo options. We utilized two logo designs and placed them on the top and bottom of our 4 image 2×6 photo strip. His guests posed in front of a personalized 8×8 step and repeat backdrop. 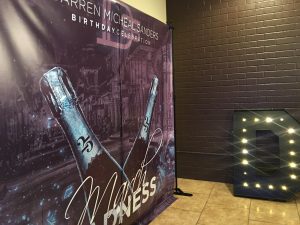 Shutters and Shoots Photobooth was so very pleased to be able to spotlight Darren’s 25th Birthday Celebration.

How to Get A Photobooth At My Corporate Event

A Story of Firsts